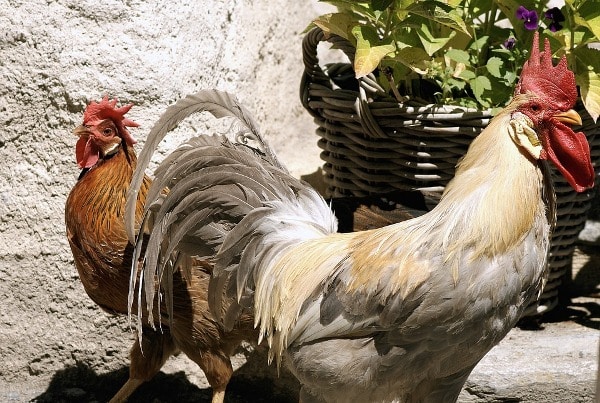 The Indian Breeds of Chickens play an important role in the rural side economies of both the developing and underdeveloped countries. Indian breeds of chicken are part of a balanced farming system that has a massive role in the rural households as a source of high-quality animal protein and also work as liquid assets which can be converted into cash income when required and play a very important role in the socio-cultural life of rural communities. The performance of the native breed can be improved by changing the diet and better health cover. However, Genetic improvement may be made by selecting the best quality of breed or by crossbreeding between the best breeds of chicken.

Domestic Chicken plays a very important role and acts as one of the most important animal species worldwide because it provides a large proportion of animal protein in human diets. Chickens are also used for ornamental purposes (e.g., silkie or bantams) and entertainment (e.g., Gamecocks used for Cockfighting).

How Chicken Breed’s Evolved Over the Years

The Contemporary chicken was most probably developed from its primary wild ancestor, the Red Jungle Fowl when its domestication was done in Southeast Asia in 3200 B.C. As the years passed, The Chicken has evolved from the wild form to the multiple contemporary forms, Broilers, Bantams, Game, and fancy breeds, including the native village chicken available today.

Industrialization and Globalisation in the 20th century have dramatically affected chicken production and affected the distribution of chicken genetic resources worldwide.

The Indian Birds are Non- descriptive and are of very little value as layers. In India, large numbers of birds are found in different sizes, shapes, and colors. They vary in appearance according to the region in which they have been bred.

The chicken breeds like Chittagong, Aseel, Langshan, or Brahma Blood are bigger in size as compared to other breeds and have a better meat quality than others. India is making a continuous growth in the production of Broilers for the Last Two Decades.

According to the last survey report, 41.06 billion eggs and 1000 million broilers annual output, India landed as the Fourth largest producer of the eggs and fifth largest producer of poultry broiler in the World Table. At present, the Broiler production rate has been increased by 15 percent in India. The farming of broilers is considered very important in India’s National policy and said that it has a good scope for further development in the coming years.

Best Breeds Of Chicken In India:-

The name of the chicken breed is acquired from the Ankleshwar region of the district Bharuch in Gujarat.

These Birds are mainly headed or reared by the south Gujarati Tribal communities for backyard poultry farming.

also read: The rise and fall of Subway, the world’s food chain

As they are poor in productivity but still these birds are well known for their better meat qualities.

The Busra Breed of chicken is found in Navapur Taluka of Nandurbar, the Sakritaluk of Dhule District of Maharashtra, and the Songadh and Uchchal Taluks Surat district of Gujarat.

y)They are usually found in the North-Eastern states of India, which Bangladesh borders. These are large size birds, powerful and hardly with a quarrelsome temperament. It has all the qualities of a good game bird, such as large eyes, long mane and tail, strong and refined legs, and a high headset when in action and lowered set tail.

These chicken breeds are found in the Vizianagaram district (Bobli region) and the adjoining Srikakulam district of Andhra Pradesh bordering Odisha.

They are distributed in the districts of Kokrajhar, Chirang, Udalguri, and Baska in Assam.

The tribals of Assam rear these birds under their backyard.

These Birds are found in the Kolar district and Adjoining locations of Karnataka and Andhra Pradesh. They are mainly Brown followed by the black. The pattern of the color in males is usually patchy and spotted in females. Shining Bullish black feathers are usually found on the tail, breast, and thighs of cocks. Feathers of the neck are golden in color, and wallets are absent in this breed.

This Breed is reared by the Nomads of Andhra Pradesh and Karnataka and is usually mainly maintained for eggs and game purposes and raised in a backyard farming system.

The Real name of the breed seems to be Kalamasi, Which means a fowl with black flesh. However, this breed is usually called Kadaknath. Adult Chicken Varies from silver and gold-spangled to bluish-black without any spangling. Skin, Beak, toes, and soles of feet are slate in color. The eggs are light brown. Comb wattles and tongue are purple. Their Blood is thick and darker than the other breeds.

The tribals breed this breed of chicken in the Jhabua and Dhar districts of western Madhya Pradesh.

They are distributed in the Kashmir region at 1500-2000 meters above sea level. They are small in size with a single comb and wattles.

The average weight of the egg:46.06grams.

The breed is more suitable for cold climates and mountainous regions.

Miri chicken is found in Assam and, to be more precise, in Dhimaji, Lakhimpur, and Upper Assam regions.

The rise and fall of Subway, the world’s food chain
Comment