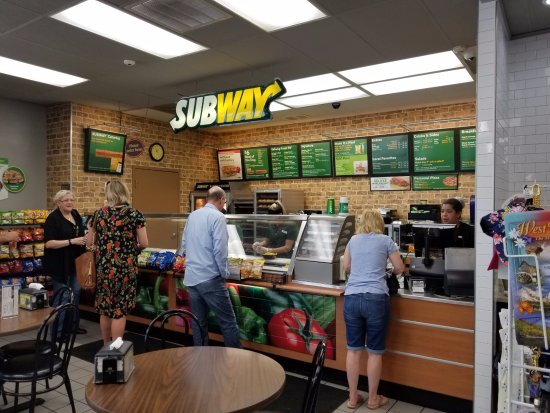 What is a Subway Restaurant?

Subway Restaurant is an American-based fast-food restaurant, which sells salads, submarine sandwiches, and beverages. This restaurant was founded by  Fred DeLuca, who was 17 years old, and Peter Buck financed it in 1965, known as Pete’s Super Submarines. After two years, the restaurant was renamed “Subway.” Gradually it started to become famous and expanded to become a global franchise.  It was also a fast-growing franchise as compared to other franchises in the world in 2015. It has locations in more than 100 countries and territories. It has a headquarter in Milford, Connecticut.

Who is the owner and owned by?

The owner of the subway restaurant is Doctors Association Inc

And it is owned by Fred Deluca, a 17-year-old boy.

Who is the CEO of the subway restaurant?

The CEO of the restaurant is John Casey, who looks upon the business growth of the subway

While starting the restaurant by Fred Deluca, he needs to borrow $1000 from his friend Peter Buck to start the Subway Restaurant in Bridgeport, Connecticut, in 1965. In the same year, i.e., 1965, they formed a doctor association to see the works of the restaurant as an expanded restaurant. Subway sandwich shops are located in more than 110 countries. It has become the world’s most famous restaurant food chain, with “sandwich artists” in American outposts and other countries with more than McDonald’s and Starbucks.

During the year 2007, Subway restaurant was continuously growing and was ranked in Entrepreneur Franchise 2005, which was popular in the world. It also ranked three positions on “Top. Global Franchise ” As per the report, Suzanne Greco became president and CEO after her brother Fred DeLuca, the company’s first CEO, died of leukemia in September 2015 after being ill for two years in January 2015.

Soon this restaurant became very popular for submarine sandwiches, salads, and beverages. And it covered a maximum of locations in all the countries of the world. Subway Restaurant has also opened its franchise in gas stations, at truck stops, and also in convenience stores. According to the record, Subway Restaurant has also marketed itself as a healthy fast-food option. The company started to begin its health advantages when the country became increasingly diet-crazed. Subway recently released a campaign that advertised its seven low-fat sandwiches, which are very popular in the world compared to other fast-food chains’ which are sometimes unhealthy like burgers and tacos.

Location of the Subway Restaurant

As of June 2021, Subway Restaurant has approx. 37,500 locations in 104 countries and territories (as per google), which are independently owned by the owner—primarily located in North America, with 21,796 in the United States 2881 in Canada, and 758 in Mexico.

Product of the Subway Restaurant

The main product of Subway Restaurant is sandwiches. Besides Sandwiches, this restaurant also sells other products like cookies, soup, drinks, snacks, etc. According to the records, sandwiches is the best-selling snack of subway restaurant. The main aim of this restaurant is to make every order ordered by the customer tasty and especially they make an attractive look for every customized product. The restaurant provides the best quality, and they are very strict about the item they serve to their customer.

The customer used to love the products of this restaurant, and they stand as the world’s biggest food chain in fast food. The food chain of subway got one of its boosts in Washington in 1977, which was the highest growth for the company, when Larry Feldman, an assistant minority counsel to the House Banking Committee, opened one of the earliest franchises near a House office building. It turned the subway food chain into a popular restaurant. The food chain has excelled at sometimes as it uses product placement.

Fall of the Subway Restaurant

According to research from Technomic shows, Subway’s restaurant sales dropped to $8.3 billion in 2020, which leads to falling in front of the world, a popular food chain for fast food items with more than 100 locations in the world, which is down from $10.2 billion in 2019. And this decline in business has resulted in the closing of the restaurant. Due to this loss of the business, the company couldn’t take it, for which they had to close the restaurant.

Another reason is when McDonald’s was adding a breakfast menu to their list and the now-famous McCafé to their list of sources of income, Subway depended totally on their sandwiches, which pulled them back and resulted in falling the food chain as they couldn’t update themselves, which was the most important disadvantage of the subway. This led to one of the major reasons for falling of the income. The bigger Subway got, the more important it was to have more than just a sandwich to their name.

Subway recently reported that it closed 10% of its stores last year. The pandemic restrictions, affected the restaurant a lot and decreased the restaurant’s sales. The restaurant of subway lost nearly $120 billion in sales during the pandemic of 2019. Subway has closed its shops in over 1,000 locations in the US in 2019 because the sales dropped by $210 million.

The subway was very popular, but due to the lack of development and less innovation, the restaurant resulted in closing as the investment was high. Profits for three consecutive years were down, and the loan on this company was so high that the last option left to them was to close the subway restaurant, known as the world’s biggest food chain. It is also known for its downfall. This company also had less revenue for which they cannot showcase their product much with the time. They couldn’t do advertisements like other brands for which they stopped themselves from growing. This was the most popular restaurant in the world and the placements for these restaurant locations were also high; almost most of the places of different countries were located on this subway, the world’s biggest food chain. Subway could develop a marketing strategy, but instead, they dined to do anything for marketing for which they fall, and as a result, they need to close this subway, the world’s biggest food chain.